Free Shipping in the Contiguous U.S. for orders of $75 or more!

Although hardly on most people's top ten favorite seafaring beasts lists, stingrays are some of the ocean's most beautiful and deadly creatures. Yes, we’re talking about the same kind of stingrays. The kind you hand fed while scuba diving on your vacation to Bora Bora and initially mistook for a shark when it snuck up on you from behind. Your in-laws still can't get over those hilarious pictures of you flailing like a duck. Mind you, don't get too embarrassed - anything can look clumsy next to this deadly angel. In fact, there are few creatures in the sea that can match the wispy grace of a stingray’s, fluttering silken wings as it glides through the endless blue. Their smooth skin and magical soar is among the most under-appreciated spectacles in the entire ocean.

It was this attractive splendor, that brought television legend Steve Irwin, Crocodile Hunter, to film them on what was to become the final day of his life. On September 4, 2006, Steve was filming shots for his daughter’s television program, Bindi the Jungle Girl, and couldn't pass up an opportunity to get tail-end footage of a stingray up close. While most stingrays are friendly and docile in nature, this particular one seemed to feel boxed in by Steve's camera, and behaved defensively as to a predator. In an instant, it lunged out and attacked, piercing Steve with its spear-like tail several hundred times within the span of a few seconds. To the dismay of millions of fans, friends and family all over the world, Steve died shortly after this event.

It’s a humbling lesson to us, the unpredictability and feral power of nature. It’s with no small amount of reverence, therefore, that we should treat a treasure so profound as stingray leather. Like all leather, this skin breathes still with a different sort of life, and will require respect and tender care to preserve the surreal eminence that enraptured you long before it departed the ocean deeps.

Alright, we have established stingrays are pretty awesome as animals go, but how do they rank among leathers? Let me give you an idea. During the age of medieval Japan, the noble Samurai actually used stingray to craft their armor. This hide, ten times stronger than normal leather, proved impenetrable to the blade, and was even used for the sheathe itself. It was not until the advent of actual gunpowder that stingray fell out of style. This stuff is tougher than nails.

It’s not just stingray’s toughness that makes it so appealing. The leather’s appearance is like nothing else you’ve ever seen. While stingray’s hide can appear light and smooth underwater, when dried, they form a beautiful, bright blanket of pearls. Thousands of these gems cluster tightly together, making it practically impossible to cut or tear. Leather crafters have found numerous ways to use this spectacular skin. Shagreen, among the most popular approaches for stingray, is a type of untanned leather with a rough and granular surface, sometimes used for book bindings, pocket books and small cases, and in the great Japanese tradition of hilt and scabbard making. Likewise, leather crafters can instead buff off the top of the leather’s beads, creating an exotically speckled surface that must be seen to be believed.

Speaking of which, check out this shiny picture! You can thank us later. 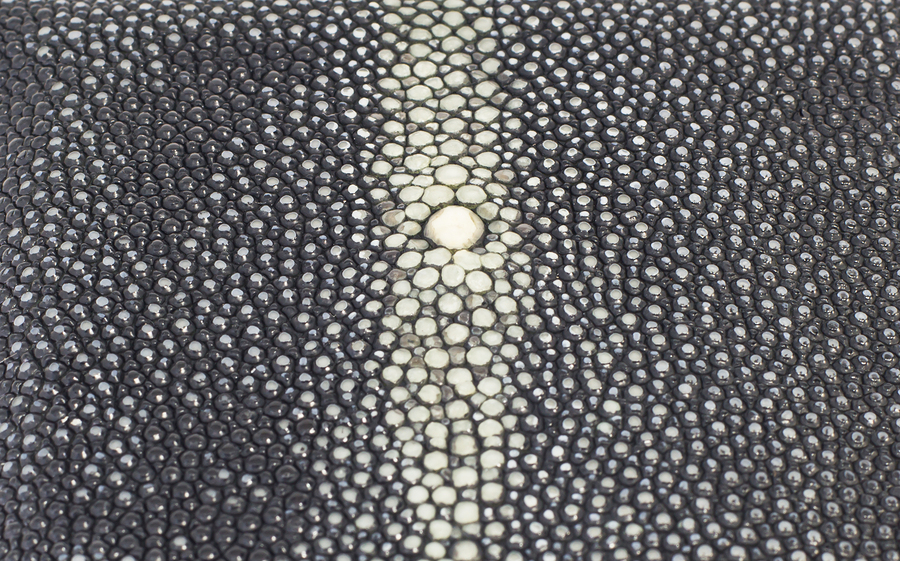 Regardless of whatever type you get, you’ll want to make sure your valuable receives proper stingray leather care, as they aren’t the cheapest variety of leather you’re likely to find. Fortunately for you, stingray leather is relatively easy to maintain, and diligent stingray leather care will ensure they’ll still be alive and swimming years after you are dead.

Good stingray leather care involves lightly cleaning your stingray leather every few days, or after it’s been exposed to considerable amounts of dirt. To clean it, use a soft, barely dampened cloth and wipe the stingray gently across its surface. Try not to rub too hard, as many times stingray leather skins are both dyed and surface painted, and a vigorous scrubbing can remove some of its color, giving it an uneven appearance. If you encounter any tough spots to clean on your leather, you may use the suds from a very mild soap and water mixture with your damp cloth to gently massage with. You should not use any commercial leather cleaners or standard soaps, as they can likely cause great harm to your stingray leather. You can read about this in our blog “Common Leather Care Mistakes.”

After you have thoroughly cleaned the stingray’s surface, you’ll want to dry it. As a plus, stingray leather is remarkably fire and water resistant, and can handle greater amounts of water exposure than most other forms of leather. Still, it’s important to let it dry properly when it gets wet, especially if it gets soaked under rainfall or dropped in a puddle. It’s important to realize that heat and sunlight are not your friend when drying this cool seafarer out. Sunlight has the unfortunate effect of parching out leather on many occasions, and heat has a tendency to attract mold, which you can read about in our blog “How to Clean Mold From Leather.” It may also be a good idea to use an exotic friendly leather protector to prevent any future exposure to harmful elements. Test on a discreet area and observe its effects after drying before use. Spray repellents are best for your stingray leather care purposes.

One last note – cleaning and conditioning is only half of the good old stingray leather care treatment. You’ll need to keep it stored in the right places if you don’t want it keeling over on you like a dead fish. Cool, clean, dry places are best, away from direct contact with other leather products (lest the finishings give them cause to stick together). Plastic bags and plastic period are bad for storing your leather, as this keeps it from properly breathing. Paper, on the other hand, such as packing paper and tissue paper, can work fantastically, as can cloth. Lastly, moisture and direct heat, such as sunlight, is a big no-no. Which you already know all about, since you are a diligent, informed reader and clicked on our earlier exhaustively assembled compendium on all things mold and how to remove them, right?

In that case, that’s about all we have right now. Hang on to those hats, folks! We’re not done yet! Check back soon for more fascinating articles on more exotic and fabulous animals like stingraaaaaays. Cheerio!